The environmental activist who made an emergency landing into the stadium hosting the Germany-France Euro 2020 match in Munich only narrowly avoided being shot down by snipers because police spotted the Greenpeace logo, Bavaria’s interior minister said on Wednesday.

“The snipers already had him in their sights,” the regional minister Joachim Herrmann said in a statement.

“If the police had come to the conclusion that it was a terrorist attack, he would have paid for it with his life.”

Only the large Greenpeace logo emblazoned on the yellow canopy of the parachute microlight saved him, he said.

The environmental campaign group has apologised for Tuesday evening’s widely condemned stunt, which it said did not go as planned.

Two people were injured in the activist’s attempts to make an emergency landing inside the Allianz Arena, a French citizen, 36, and a Ukrainian, 42.

Both were taken to hospital with head injuries but have since been discharged, Munich police spokesman Sven Mueller told AFP.

The Greenpeace activist, identified as a 38-year-old man from the southwestern town of Pforzheim, was arrested after landing on the pitch among the German and French players.

The pilot was not injured.

The man has been released from custody, he added.

In extraordinary scenes widely captured on camera, the activist was seen flying over the stadium strapped to a parachute microlight before apparently getting tangled in overhead camera wires.

He was thrown off course and nearly crashed into the stands before landing on the pitch shortly before kick-off.

His parachute had “Kick out oil! Greenpeace” written on it.

Greenpeace was quick to apologise for the botched protest, saying the aim had been for the activist to drop a latex ball with a protest message onto the pitch.

“Technical difficulties forced the pilot to land inside the stadium. We deeply regret that this put people in danger and caused injuries,” the environmental group said.

It said the protest action had been aimed at urging Euro 2020 sponsor Volkswagen to stop selling diesel and petrol cars.

The protest has drawn criticism and raised questions about security measures at the game, attended by 14,000 fans.

Munich police said they had “no understanding whatsoever for such irresponsible actions”.

Bavaria’s interior minister Herrmann said Greenpeace would have known in advance of the strict no-fly zone above the stadium, calling the stunt “unjustifiable”.

Chancellor Angela Merkel’s spokesman Steffen Seibert called the protest “an irresponsible act that placed people in great danger”, and said it was “a great relief” the outcome hadn’t been worse.

UEFA called it “a reckless and dangerous action” that “could have had very serious consequences”. 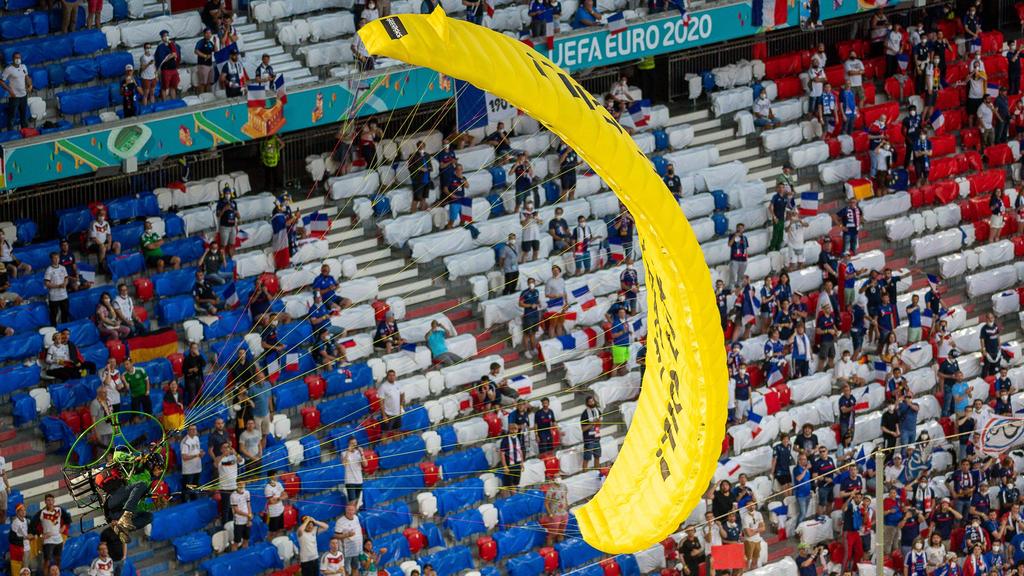