Hungary on Saturday claimed that UEFA is a “pathetic and cowardly body” after the country’s football federation was sanctioned for the “discriminatory behaviour” of the team’s fans during Euro 2020.

European football’s governing body ordered Hungary to play their next three games behind closed doors and fined the federation 100,000 euros ($119,000).

UEFA investigated racist monkey chants and homophobic banners during Hungary’s matches in Budapest and Munich at Euro 2020, from which they were eliminated in the group stage.

The Hungarian government has been criticised by several of its fellow European Union nations for implementing anti-LGBTQ laws.

“It seems that UEFA continues to employ snitches, who have nothing else to do, just to write reports of what was said (or wasn’t said) in the audience,” Hungarian foreign minister Peter Szijjarto said on Facebook.

“As in communism: no evidence is needed, the report of the snitch is enough.”

The discriminatory behaviour of some Hungarian supporters was one of many controversial incidents during the tournament.

UEFA refused a request from the Munich local authorities to light up the Allianz Arena in rainbow colours in support of the LGBTQ community ahead of Germany’s match against Hungary.

A Germany fan ran onto the pitch during the Hungarian national anthem with a rainbow flag in protest.

“It’s ok to rush onto to the field during the anthem and provoke the players singing the anthem,” continued Szijjarto, before claiming Hungary was sanctioned for having a full stadium.

“It’s okay to light up the opponent’s goalkeeper (referencing an incident for which the English Football Association was fined).

“But to have a full stadium and cheer, creating an amazing atmosphere, well, because of that you have to close the stadium…

“The committee that makes such a decision is a pathetic and cowardly body. They should be ashamed of themselves!” 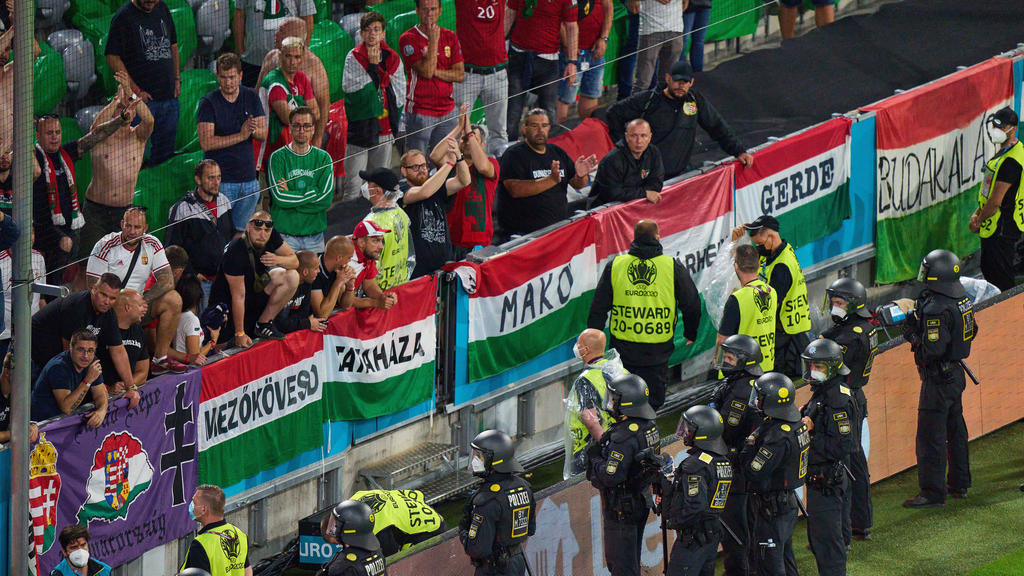